At the Internet Alliance event this morning, someone from Computerworld gave me a copy of their latest issue. The headline was “Security Incidents Soar”, with the details of the half-year review by CyberSecurity Malaysia.

Typically, the usual incidents list evolve around spam, intrusions, frauds, viruses and so on. However, storage always seems to be missing. As I see it, storage security doesn’t sit well with the security guys. In fact, storage is never the sexy thing and it is usually the IPS, IDS, anti-virus and firewall that get the highlights. So, when we talk about storage security, there is so little to talk about. In fact, in my almost 20-years of experience, storage security was only brought up ONCE!

In security, the most valuable piece of asset is data and no matter where the data goes, it always lands on …. STORAGE! That is why storage security could be one of the most overlooked piece in security. Fortunately, SNIA already has this covered. In SNIA’s Solid State Storage Initiative (SSSI), one aspect that was worked on was Self Encrypted Drives (SED).

But there were prohibitive factors that dampened the adoption of self-encrypted drives. First of all, it was the costs. It was expensive a few years ago. There was (and still is) a lack of knowledge between the hardware of Self Encrypted Drives (SED) and software-based encryption. As the SED were manufactured, some had proprietary implementations that did not do their part to promote the adoption of SEDs.

As data travels from one infrastructure to another, data encryption can be implemented at different points. As the diagram below shows,

encryption can be put in place at the software level, the OS level, at the HBA, the network itself. It can also happen at the switch (network or fabric), at the storage array controller or at the hard disk level.

EMC multipathing software, PowerPath, has an encryption facility to ensure that data is encryption on its way from the HBA to the EMC CLARiiON storage controllers.

The “bump-in-the-wire” appliance is a bridge device that helps in composing encryption to the data before it reaches the storage. Recall that NetApp had a FIPS 140 certified product called Decru DataFort, which basically encrypted NAS and SAN traffic en-route to the NetApp FAS storage array.

And according to SNIA SSSI member, Tom Coughlin, SED makes more sense that software-based security. How does SED work?

First of all, SED works with 2 main keys:

The DEK is the most important component, because it is a symmetric key that encrypts and decrypts data on the HDDs or SSDs. This DEK is not for any Tom (sorry Tom), Dick and Harry. In order to gain access to DEK, one has to be authenticated and the authentication is completed by having the right authentication key (AK). Usually the AK is based on a 128/26-bit AES or DES and DEK is of a higher bit range. The diagram below shows the AK and DEK in action:

Because SED occurs at the drive level, it is significantly simpler to implement, with lower costs as well. For software-based encryption, one has to set up some form of security architecture. IPSec comes to mind. This is not only more complex, but also more costly to implement as well. Since it is software, the degree of security compromise is higher, meaning, the security model is less secure when compared to SED. The DEK of the SED does not leave the array, and if the DEK is implemented within the disk enclosure or the security module of SoC (System-on-Chip), this makes even more secure that software-based encryption. Also, the DEK is away from the CPU and memory, thus removing these components as a potential attack vendor that could compromise the data on the disks drives.
Furthermore, software-based encryption takes up CPU cycles, thus slows down the overall performance. In the Tom Coughlin study, based on both SSDs and HDDs, the performance of SED outperforms software-based encryption every time. Here’s a table from that study:

Another security concern is about data erasure. According to an old IBM study, about 90% of the retired HDDs still has data that is readable. That means that data erasure techniques used are either not implemented properly or simply not good enough. For us in the storage industry, an effective but time consuming technique is to overwrite the entire disks with 1s and reusing it. But to hackers, there are ways to “undelete” these bits and make the data readable again.
SED provides crypto erasure that is both effective and very quick. Since the data encryption key (DEK) was used to encrypt and decrypt data, the DEK can be changed and renewed in split seconds, making the content of the disk drive unreadable. The diagram below shows how crypto erasure works: 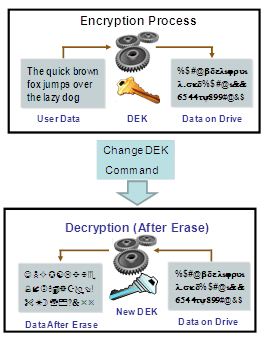 Data security is already at its highest alert and SEDs are going to be a key component in the IT infrastructure. The open and common standards are coming together, thanks to efforts to many bodies including SNIA. At the same time, product certifications are coming up and more importantly, the price of SED has come to the level that it is almost on par with normal, non-encrypted drives.

Hackers and data thieves are getting smarter all the time and yet, the security of the most important place of where the data rest is the least considered. SNIA and other bodies hope to create more awareness and seek greater adoption of self encrypted drives. We hope you will help spread the word too. Betcha thinking twice now about encrypting your data  on your disk drives now.